Tom Keating of the TMC Net "VoIP and Gadgets Blog", please consider researching the facts before posting. You can't trust every company president who booths at the TMC IT Expo.

In a September 1, 2009 posting, "XCast Labs Cuts VoIP Bandwidth Requirements In Half," Keating oohs and ahs over XCast Lab's use of ordinary SIP technology. The technology innovation is described thus:

XCast Labs on the other hand uses their patented "direct RTP" which is able to tunnel through both user's firewalls and setup a direct peer-to-peer (P2P) RTP session between the two users. Once the call is setup, the two users are able to send the RTP media directly to each other. Since both callers are in California, they are just a few hops/routers away from each other thus dramatically reducing latency and jitter. XCast Labs simply maintains a small signaling connection to determine when the call ends for billing purposes.

Keating was "dumbfounded that no one else had thought of this". He should be dumbfounded if no one else had done this. XCast labs is using the the STANDARD way of doing RTP (prior to the hosted VoIP industry). There's nothing new here. 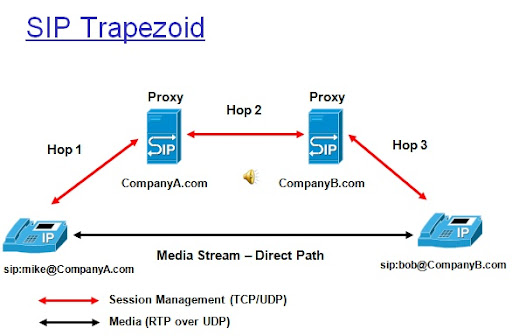 And let's not forget Verizon's patent, US Patent 6,104,711. In 2006, Vonage was found to be infringing of that patent. That patent covers cases where the IP address of the called party is returned to the calling party. This is exactly the requirement for XCast's direct media to occur!

So this is prior art -- and actually covered under another patent. Verizon has not apparently tried to enforce this patent, yet, against all the other service provides. In fact, Verizon USES BroadWorks and Acme Packet itself in their new fIOS VoIP architecture.

Update 2009 September 15: Tom Keating revised his post with some more details on the claim of new technology:


Ok, some clarification from XConnect. The key point which I guess I may not have made clear in my article is that their direct RTP is able to penetrate firewalls and initiate direct RTP sessions. That's their "secret sauce".

Here's what Vlad Smelyansky from XConnect told me:

Your description of our RTP is wrong and the comments (except reference to the patent) are correct. The guy actually picked on the core mistakes and ignored the rest.

There are gazillions of other cases when people are using direct RTP. Our patent and technology is not about the idea of sending traffic directly between end points because that is part of the RFC. Our patent and technology is that we actually can do it between endpoints behind firewall(s) without any special configuration of firewalls (NAT) or deploying additional technologies (STUN) on those endpoints. ACME, Nextone, and Ditech tried to do this and came to the conclusion that it is impossible without additional protocol or special firewall configuration. But if endpoint devices are on a public IP or the user is willing to do special NAT or use STUN, they all can do Direct RTP for last eight-nine years. Our specialty is that we can do it with almost any endpoint behind a firewall and do it totally plug-n-play. No one else can do that.

He referred to my comment about the patent. I am not a lawyer, but Vonage was found infringing of the claim in the patent where the IP address of the called party is provided to the calling party. AFAIK, Verizon hasn't tried to sue anybody else about that claim in US patent 6104711. Perhaps XCast has some way of setting up direct media between the calling and called parties without returning their IP addresses to each other; telepathy, maybe?

Nevertheless, I only mentioned the patent because it's a dated legal document showing that people were thinking about sending media directly between the two voice-over-packet endpoints.