200 OK Top News from the World of BroadWorks 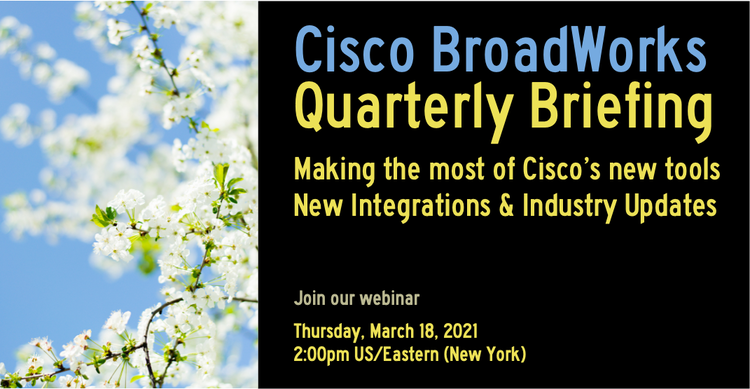 This material was originally presented in a webinar on March 18, 2021.

Scott Hoffpauir, one of BroadSoft's founders and now in the consultancy space with True North, published a blog article in March describing how he sees cloud-only providers like RingCentral and 8x8 displacing conventional service providers. While service providers are "better at scaling sales and marketing" than they are at innovating, he predicts the next generation of solutions will be not only mobile-first but probably mobile-only as well.

Telecom news site NoJitter reported in an interview the BroadWorks-based "Collaborate" service from AT&T will be discontinued this year. In the interview, Darin Ward, the Senior Voice Engineer at marketing company RRD, discovered the end-of-life date while troubleshooting the service. Ward emphasized that voice calling services continue to be critical. He told NoJitter that  "if you ask anybody on the customer side of the house, anybody in sales or support, they would say it's more critical today than ever."

Telecom buying consultant Peter Radizesci reported customers are making new long-term agreements with Cisco to buy new licenses. However, he remains skeptical about the long-term prospects for BroadWorks in the light of Cisco's push for Webex.

Verizon's One Talk service, built on BroadWorks and native cellular capabilities, continues to expand. One analyst described One Talk as transformative, calling it an important "first step" for the mobile (cellular) communication industry. In February, research firm Frost & Sullivan recognized Verizon as a leader among Business Communications service providers, specifically citing the BroadWorks-based One Talk service.

TPx, the merger formed of two BroadWorks operators, TelePacific and DSCI, is reported to be one of the first service providers going big with their Webex for BroadWorks integration.

This month, Evolve IP announced a new service by which Microsoft Teams capabilities are provided and Voice through their BroadWorks-based platform. This is added to their existing Webex-based capabilities. They report that that 62% of the meetings market is dominated by the combination of Microsoft Teams and Webex.

Fourteen IP, a service provider focused on the hospitality industry covering nearly a quarter-million hotel rooms,  announced they had acquired a georedundant BroadWorks platform with data centers in the US and Europe.

Florida-based service provider Cloud Communication Concepts, or C3, announced in January a georedundant expansion of their network, with servers in Miami and Las Vegas. C3 outlined that they are using Cisco UCS server hardware, VMWare for virtualization, and Oracle Session Border Controllers.

ECG's own software Alpaca was updated for the latest BroadWorks releases and provides network management, Bulk Provisioning, a User Self-Care portal, and a plug-in extension framework. Alpaca has been deployed in several service providers, including CenturyLink, AT&T, along with government agencies, where it aids security compliance for BroadWorks.

TekVizion, an integration testing firm, announced an offering for automated testing for the Webex for BroadWorks product line.

In January, Cisco published a new reference branch-office topology to integrate any BroadWorks-based service provider with Cisco’s Meraki product line. This is one of the first Cisco-approved and documented combinations of BroadWorks with other Cisco products.

BroadWorks Changes coming from Cisco include the migration from Xchange to the Cisco site.

Cisco is releasing some details of features coming in BroadWorks release 25. Cisco is investing in development to make the Application Server more efficient at handling large numbers of subscriptions for information services. These subscriptions are used for busy lamp field, XSI call control, meet-me conferencing, and other popular end-user features. A new feature slated for Release 25 allows operators to identify better devices generating many new subscriptions so that misbehaving clients can be dealt with.

Voicemail protection is getting enhanced. Typically, desk phones were considered secure, and mobile phones at higher risk. But because mobile phones are typically locked with a passcode or biometric ID, some operators wish to require a voicemail login PIN only for desk phones. A new feature coming will provide this exact functionality, allowing mobile device users to listen to voicemail without a PIN while still requiring authentication for other device types.

Making the Most From Cisco's New Tools for BroadWorks

ECG Quarterly BroadWorks Briefing with special guest: Scott Hoffpauir, BroadSoft's Co-Founder and CTO Join ECG as we dive into Cisco's latest tools for supporting your BroadWorks platform. Plus, get up-to-date current news on the latest changes in BroadWorks and the ecosystem for Service Providers and Enterprises. ECG provides frequent updates for BroadWorks operators, giving you fresh, independent insights into innovations, changes, and risks. With over 20 million people worldwide depending on BroadWorks, it's the Number One platform for cloud calling. ECG has been providing independent technical services on BroadWorks since 2002. • Latest News on Changes in BroadWorks • Special focus: New services provided by Cisco to help engineering teams support their networks  • Review of the BroadWorks operator ecosystem   Panelists: Jon Chleboun, Brian Tate, Sherwin Crown, Mark Lindsey
Post

Cisco BroadWorks has numerous log files distributed across many servers. This course covers the BroadWorks Application server logs, including the XSLog, AuditLog, and PSLog. We also cover key logs on other servers, including the Network Server, Media Server, and XSP. We show how to summarize and analyze alerts and traps on servers. We discuss how to troubleshoot Device Management, Calling, Provisioning, PSTN Gateway Operation, and other problems. Sample log files allow you to get practice analyzing real-world log files. Graded Exams; Certificate Provided. 1 class session / 2 PDH.