Note: The following essay was adapted from a talk I gave to staff at Earthlink Business in January 2011.

Do we really need telephone companies, or are they a relic of the past technology, now replaced by data networks?

I had this question upon entering the voice side of the Networking Industry, coming from classical Computer Science and Data Networking. Technology history had shown that centralized systems concentrated too much risk, and could generally not scale well. All the successful systems distributed the knowledge and the power. Consider, for example, DNS, the web and email. In every case of successful Internet technology, the smarts and flexibility and power were moved from a centralized database to a vast set of unaffiliated servers. The future was distributed, with intelligence moving closer to the edge. 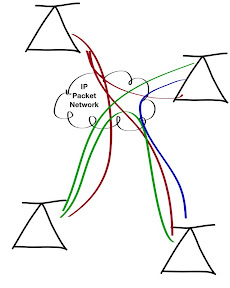 When I began my work in telephony, I was mildly shocked to learn that the modern Voice over Internet Protocol (VoIP) phones, each with its own IP address, DNS resolver, and modern processor could not automatically locate the other VoIP phones out there on the Internet. Why would a new era of technology bother to reproduce the oddities of a former generation? By that time, in 2003, Skype was a big, working success. Shouldn't a $400 VoIP phone have the same kinds of capability, but without the dependence on a PC?

To my mind, VoIP only made sense if we went all the way to distributing all the logic, intelligence and features to the endpoint. This was the Internet era, after all! 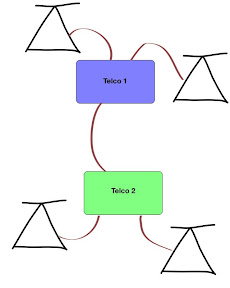 Instead, "modern" VoIP telephone companies are busily reproducing the architecture of the past. Each service provider has some sort of centralized a "switch," and each telephone would be provisioned (configured) in that switch as a separate user or line. Then the switches are connected to one another, primarily via 1970's-1980's TDM technology using antiquated protocols.

It's easy to see the historical reasons for this model: the old endpoints were extremely simple by modern standards. And it's easy to see why the telephone companies would like this model: it ensures customers are dependent on them; that helps to ensure ongoing recurring revenue.

But are those historical reasons enough to maintain the "telephone company" model into the current era? If there's a more efficient model coming, then the market will, eventually, kill off the old model, even if it has a lot of inertia. So is there any real reason to keep this centralized model in place, besides the business motivations, and plain inertia?

And why hasn't VoIP brought about the hope heralded since the 90's: free phone calling, and no more telephone bill?

It's been about ten years since contemporary VoIP systems were born. Now we don't even start CLECs -- we start ITSPs -- but some of the fundamental values of telephone companies have been retained. One key value is the (1) user the location database. Telcos have a way of tracking down a user, whether he's connected to a different point on the frame, or does a SIP REGISTER from a new IP address. Closely related to this, telcos have a (2) simple and understood user addressing -- i.e., telephone numbers. People are comfortable with telephone numbers, and they work reliably to connect calls. Another key value is (3) quality, i.e., reliably establishing the voice call, because the telco may own or operate every device along the path of the telephone call.

Those are all technical issues that users experience. But there are other advantages owing to the telco model that users don't normally experience. One of those is (4) call routing. Users aren't aware of which way their call is routing to reach the final destination, and still achieve the user addressing, quality, and location services. Another related function is (5) interconnection, allowing competent network operators to connect calls to other competent network operators. Closely related to routing is (6) privacy: there's an expectation and a penal code ensuring traditional telephony that the calls are not subject to disclosure. Calls are routed between competent service providers who each take a responsibility for ensuring the privacy.

If we consider VoIP in particular, service providers have an advantage by(7) accommodating existing network complexity -- especially NAT. Hosted NAT traversal through SBCs has been a key contributor allowing Hosted PBX services to be easy to deploy, reducing the cost and complexity of the device at the NAT boundary between Public Internet and private VoIP network. Further, telephone companies can provide (8) simple deployment of endpoints by centralizing the software and configuration of SIP phones into centralized servers.

There are other convenient services, like accounting. If every device was independent, who would keep the records of the phone calls? But perhaps the question is: would anybody care about records, if every call was free. Who keeps the records of web site visits, or Instant Messenger exchanges? So I don't consider accounting to be a fundamental value, but rather an incidental service useful for the current model. Another is interoperability. Service providers reduce the number of logical interconnection points that must be integrated properly. The alternative is negotiation, where each endpoint tries to cooperate with every other endpoint. Within the VoIP industry desultory success with practical endpoint negotiation has not established confidence that this will be easy.

If you're in a business, and you're worried about competition coming in and replacing you with innovation, you should go ahead and do that innovation yourself. So what would it take to displace the telephone company? I.e., what would it take to eliminate the organization that is somehow responsible for each phone call? For this purpose, I'm going to allow some service providers, like DNS operators and ISPs, because they don't know or care about each phone call.

1. User Location: Dynamic DNS to the rescue? The Telco/service provider knows where users are, via static configuration, or SIP registration, or some other trick. Distributed Hash Tables were a popular idea in 2002 timeframe. Skype was designed as a DHT; has that but they still operate a for-profit service provider at the center involved in individual phone calls. The classic SIP idea is to use DNS, then have a SIP URI Address of Record similar to your email address. For example, sip:lindsey@ecg.co could be the address on my business card. Conceivably, dynamic DNS could be used to update my user-agent location, so that when you call me, DNS can show you how to reach me. (It would also expose to the world the current IP address of one of my SIP devices. But there are some drawbacks: How would traditional PSTN callers contact you? Clearly, you'd want a forwarding number connected to the PSTN, and that would mean you need a service provider. 2. Convenient User Addressing: Long live the telephone number? Telco-type Service Providers can use telephone numbers, but this relies on a centralized coordination authority to prevent collisions and partition the space. Telephone numbers also once gave a sense of location. One method would be a separate block of telephone numbers, e.g., a new country code, connected to the PSTN. Dynamic DNS could be used to map those to your current IP address, to accommodate numeric dialing from the Internet. But you'd still need a gateway from the PSTN onto the Internet. And when you call to the PSTN, you'd want to appear on caller ID as something useful -- maybe "sip:mark@ecg.co" in the caller name field. 3. Quality. Packet Prioritization by all ISPs Telephone companies can ensure quality by using dedicated transport for the telephone calls. But users don't have a convenient way of getting their own guaranteed capacity for communication with one another. Right now, the Internet does not provide reliable, consistent quality for all voice calls. It's really close, though. One way to ensure quality would be prioritization. We'd each pay for the right to transmit prioritized packets. All the ISPs would agree to prioritize some packets through their networks, e.g., packets with DSPC value EF. ISPs may find it's easier just to allow 10% of each user's capacity to be prioritized to avoid billing by the packet, and sidestep Net Neutrality concerns this would be used to give some commercial operators an advantage. Hard Problem. 4. Call Routing Service Providers have to find a path to get your call to the called party. But if parties can discover one another by resolving to a SIP Contact via DNS, then and all service providers can prioritize packets, then this shouldn't be required per se. Any ISP should be able to do this. But if we have one service provider that does not properly prioritize the packets, it would become important to circumvent their network. As of today, practically no service provider prioritizes traffic. So this brings us to: But perhaps the cooperating ISPs could also enable explicit tunnels, as is done with IPv6, to build certain routes where known packet prioritization is available. Hard Problem. 5. Interconnection. Interconnection for traditional telcos allows them to pass traffic to other telcos. How would a user get calls to and from the PSTN? Overall, the only way to communicate with the PSTN is to be part of the PSTN, and that means being a telco. You could, of course, buy service from a telco, but only for those calls that involve the PSTN. You could do this with a dual-mode SIP endpoint device: it can SIP register with a traditional telco/service provider, and it can participate in the telco-free environment of the Internet as well. Hard Problem. 6. Privacy. Telcos provide privacy by using arcane technology with expensive monitoring devices. They're also protected by laws in many countries, such as the wiretapping rules in the 1939 Telecom Act in the United States. Telco-free users could provide their own privacy through end-to-end encryption. The standards for SIP over SSL and SRTP are well evolved and proven. 7. Accommodating Existing IP Network Complexity, especially NAT. NAT and firewalls run counter to everything that's good about the Internet. They're all necessary evils, like pesticides and nuclear weapons. Telcos can deal with NAT and with firewalls by operating an SBC, like the Acme Packet SBC. But if you're trying to receive calls from the Internet, and you're behind NAT and a firewall, and there's no server on the Internet to which you can connect because you have no telco, you still need to receive your inbound calls. uPNP tries to solve this problem. IPv6 could solve the NAT part of this problem, but there are signs that the IPv6 ISPs are too infatuated with NAT to give it up for IPv6. To solve the firewall piece of this, devices need to get better at defending themselves, so that firewalls become unnecessary. Hard Problem. 8. Simple Deployment of Endpoints. Telcos of the VoIP persuasion operate servers, called "Provisioning Servers" or "Profile Servers" or "CPE Management" servers, that store the VoIP phone software and configuration files. This can make it easy to deploy a minimally-configured endpoints. But if we can assume there is no telco, how will a phone get its software and configuration? The iPhone is a good example here: where does your iPhone get its software -- from the original device vendor, or from the telco? Of course, Apple provides software to the iPhone that a user can install without help from the telco. And vendors of other VoIP devices could deliver their software in the same way: via the Internet, directly to the device. So I think this problem can be easily solved.

So we have four Hard Problems. And we have to rely on ISPs to do a lot more for us to ensure quality. And if we do want PSTN access, we're going to need to keep a service provider.

With this level of difficulty ahead, I would say the future is bright for the Telephone Company.