200 OK BroadSoft Connections 2008: the obvious ideas are all here 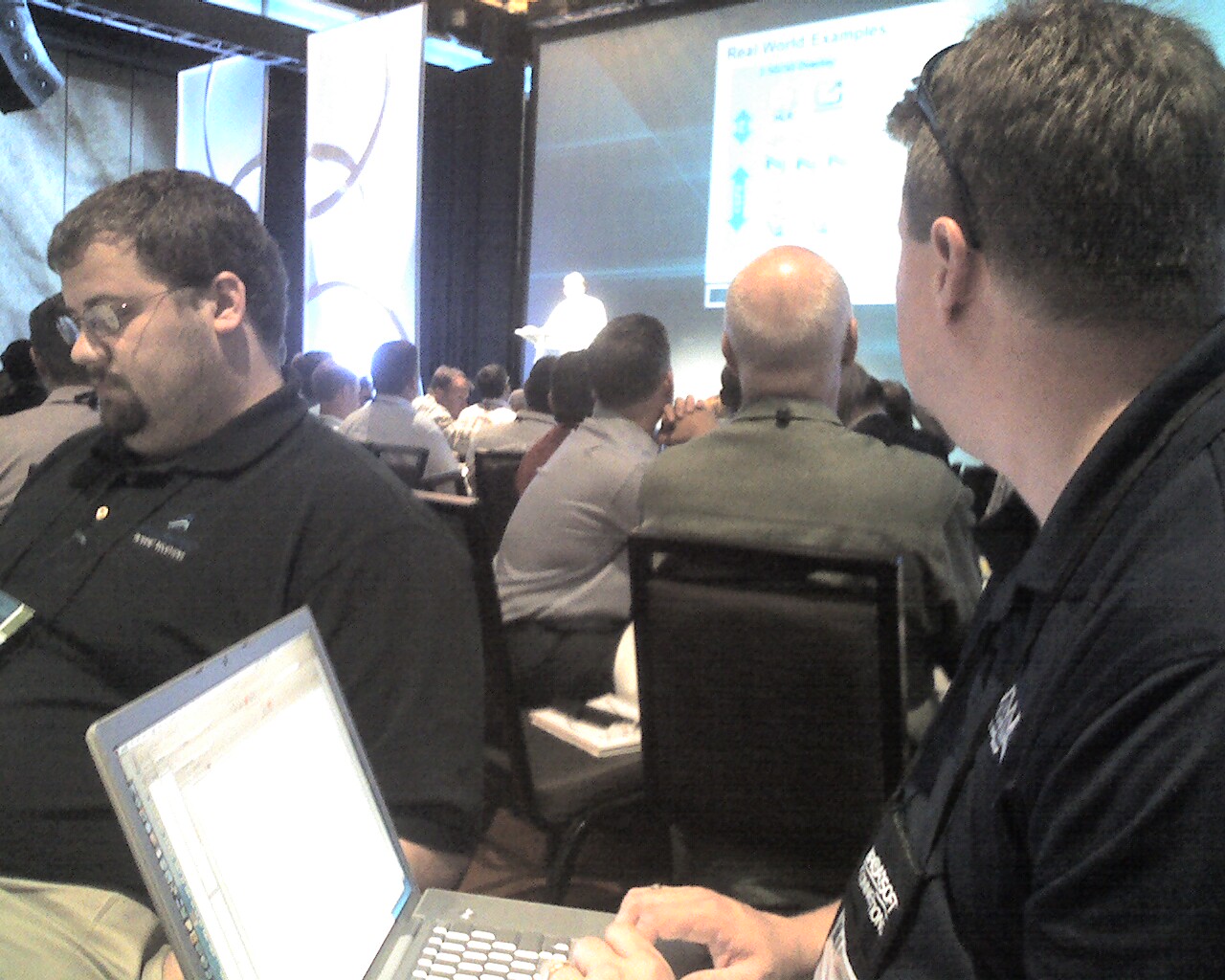 From the flight from Phoenix, AZ to Raleigh, NC: The BroadSoft Connections 2008 conference completed today. This is my third time at Connections.

The stated goal of the show is networking and dealmaking. The former is difficult to measure, but I suppose I did some of that. I know the latter occurred, and the work will occupy me for a while.

BroadSoft spent some time advertising the "xtend" platform. These are API's to control the BroadWorks call control. Their heart is in the right place: they want anybody to be able to use the BroadWorks platform for fun and profit. They want developers to harness the tool and do amazing things new things.

However, the results are mostly disappointing. We saw 1,001 ways to enable and disable Call Forwarding. And we saw a few variations on the "call this number from that address book" ; while it's true that initiating a call with an eleven-digit phone number is tedious, we haven't seen that click-to-dial is a serious enabler. I'm willing to be convinced, though.

Speaking as an opinionated engineer/developer: BroadSoft has some impediments --

2. Most of the BroadWorks documentation is locked away in the "Broad-oft Boulevard", so many outsiders can hardly understand what it does.

3. There are open-source alternatives to BroadWorks, like Asterisk and OpenSER. The former has many d�vot�es.

4. Voice calling is an intrinsically demanding medium: it requires a lot of attention to participate in a conversation. Many people intentionally avoid being reached so they can work or recover from it.

5. Voice calling has been widely abused by telemarketers. many developers currently feel like text messaging -- SMS and Instant Messaging -- is the best way to contact someone.

Among the exhibitors, ESNAtech did demonstrate some neat integration of BroadWorks, mobile phones, and Microsoft OCS. But all the pieces -- especially the latter -- are very expensive. If OCS was $100/seat, this tool would likely see more adopters.

Scott Hoffpauir, BroadSoft's CTO, showed a lot of interest in IMS. BroadSoft has a lot of apparently-true IMS capabilities and interfaces. (Somehow, IMS reminds me of Jabba the Hut. It's this massive, foreign, demanding monster.)

Hoffpauir also mentioned that BroadSoft intends to implement Call Recording, outgoing fax, and SMS functions (maybe SIP interfaces to an SMS gateway). This isn't good news for some of BroadSoft's "partners" who do these already. It's likely planners and engineers would rather wait for BroadSoft to provide and support those features.

The speaker lineup was a little disappointing. We were promised Tim O'Reilly, but he didn't show. Instead we got a soi-disant "futurist," from the "Global Futures Group". I didn't get a lot from him. The first strike against him was that he had been in business for 18 years, but he didn't offer any examples of technology he had predicted.

He talked about a global everywhere web. He mentioned clothes having their own IP address. He chastised attendees for not using a wiki to get free product ideas from customers. Yeah, OK. He was trying to inspire excitement.

His best point was about companies focusing too much on their "core competencies". It was basically a call to learn more and apply your learning.

Walter Mossberg, writer for the Wall Street Journal, lead a roundtable, including a couple of guys and Emily Green from the Yankee Group.

Mossberg made a good point. Why, he asked, can't carriers be happy with just providing the access and the transport? Instead, they try to force you to their services and their email system and their web site.

Carriers' marketing and product-management folks are afraid of being, "just a dumb pipe". What these good people misunderstand is how hard, and how important, it is to provide reliable, high-speed, low-latency Internet transport. Just do that job really well, people.

I suppose the perceived risk is of being a commodity. With LNP, you can use any "dumb pipe" for your phone conversations that you want. But one "dumb pipe" might sound better than another, or drop your calls less, or have superior customer service. It's really not a commodity.

Emily Greene of the Yankee Group made a good point, not often made: Carriers retain control of applications and features so they can make them reliable. People are willing to accept the fabulous mobility of cell phones in exchange for dropped calls and unintelligible speech. This reduced standard for quality has helped VoIP in some ways. But BroadSoft's customers are primarily selling to business users, for whom the desk phone is supposed to be very reliable and consistent.

Timothy Ferriss, author of "The 4-Hour Workweek" , also spoke. He made the greatest number of rhetorical points per minute of speaking. He talked about spending your time on the right things; i.e., eliminating low-value tasks from your work life.

He's pretty hard on email. He talked about how people lose so much time checking email, and staying informed, and trying to be involved in decisions. He suggests checking your email at set times each day, then do actual work the rest of the time.

He pointed out that human multitasking is really just task switching. Amen, brother. (Anybody familiar with Operating System schedulers already knew this. On the other hand, when I make breakfast, and have food in both the oven and on the stove, does that count as multitasking?) Switching tasks takes a lot of time and energy, and we humans usually aren't aware of the time we spend on it.

Ferriss also argued for thinking of your non-work time as necessary recovery time. If you're always checking email and continuing to work on the weekend, then you're never fully productive or fully relaxed. You and I need time to rebound from work.

ln grad school, I started taking Sundays off from work. I noticed early on that this forced me to work much harder through the week and on Saturday.

Email and computer-mediated busyness are like addictions. We keep doing the same things, frustrated by the results. We have to keep ourselves from personal harmful addictions to these machines. As the ancient Jewish Christian Sha'ul said, if we present ourselves as slaves to someone, then we effectively are slaves.